The publishing series Kyivan Christianity, launched in 2013, represent scholarly results of the education and research program of the Humanities Department and the Department of Philosophy and Theology at the Ukrainian Catholic University Kyivan Christianity and the Uniate Tradition. This academic initiative supported by the UGCC Synod of Bishops is supposed to strengthen the prophetic voice of the Kyivan Church and foster the unity of Ukrainian churches of Volodymyr’s Christening.

As of 2015, a public segment of the program – the project United Ukraine and the Kyivan Tradition – has been activated. It gives way for a public articulation of the idea of Kyivan Church and underlines the millennium-long connection between the Ukrainian culture and Christianity. The academic objective of the program lies in critical study of theological, canonical, social and cultural sources of the Kyivan Metropoly tradition in the wider comparative context of the universal Christian Byzantine traditions, traditions of the Latin West and Eastern Orthodox communities, as well as the reception of the uniate idea in the Slavoic lands. The main attention within this program is paid to an inter-disciplinary study of the Kyivan tradition formed on the civilization borderline between East and West.

Its essence is formed by Slavonic Byzantine rite (namely the eastern Liturgy), original theological thought and local church canon law, unified canonical territory, specific spirituality, shared social, cultural and religious practices, codified Church Slavonic language and well-established memory of the past. Altogether these were the forming elements of the cultural continuity of that time, and in the times of Modernity they paved way for the formation of national identities and the emergence of new ecclesiastic communities in Eastern and Central Eastern Europe. 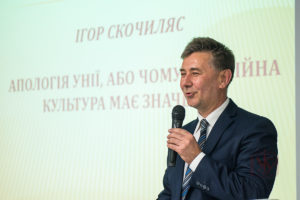 Co-coordinator of a research program

Ihor Skochylias – Dr. habil. in History, professor of the Ukrainian Catholic University, co-coordinator of a research program “Kyivan Christianity” and director of a public project “United Ukraine and Kyivan Tradition”. Author of circa 300 publications (including 14 monographs, source publications and overviews) in Ukrainian, as well as in English, Italian, Lithuanian, Polish and Russian. One of the leading researchers of pre-modern religious culture and East ern Christ ianity in Central-Eastern Europe, the Uniate ecclesial idea, and institutional hist ory of the Kyivan Metropolitanate in a comparative perspective. Active in the sphere of public history, editor and compiler of a number of periodicals, scholarly collections of articles, and books.

We have the ambition to become the expert environment that will explain and provide expert assessments for government institutions and civil society organizations and politicians to make informed, adequate decisions for today‘s Ukraine. One of today‘s topics is the issue of reconciliation, and we want to show on concrete examples how the Kyivan Church in the historical retrospect sought ways to reach agreement and unity, in spite of confessional differences.