Head of the UGCC during the presentation of the series Kyivan Christianity: One of the markers of our Church’s identity is Kyiv-centricity 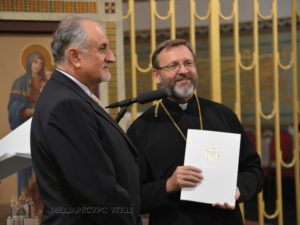 His Beatitude Sviatoslav stressed that this research is very well combined with the main theme of this year’s Synod. It is also important when we talk about markers of our identity.

“It is important that today all believers of our Church in Australia, Argentina, Brazil, Canada, America, and Ukraine have the awareness that they belong to the Church, which is centered in Kyiv. We also see that we still need to rediscover a great layer of our historical memory,” said the Head of the UGCC.

His Beatitude Sviatoslav also noted that “Kyivan Christianity” is of great importance at the same time in the context of the discussion about access to the cathedral of St Sofia in Kyiv. “There was not only a discussion but also a confrontation, saying what the Greek Catholics have to do with Sofia of Kyiv. We see that our Church is simply not yet known in those lands. In Kyiv, the banks of the Dnieper River are heavily sprinkled with the blood of the martyrs of our Church for the unity of the Church of Christ,” said the Primate.

Therefore, he believes, there is an urgent need for a research of the sources of Kyiv’s Christianity. “Today we can already boast that we have twenty volumes of such study under the title “Kyivan Christianity,” said the Head of the UGCC.

His Beatitude Sviatoslav presented this work to the Pontifical Oriental Institute. He thanked the sponsors who supported these studies, in particular Bohdan Buts’, Zynoviy Kozytsky, Myroslav Senyk, Ivan Torsky, and Oleh Shuptar.

Department of Information of the UGCC

Launched in 2013, the publishing series “Kyivan Christianity” presents the results of the educational program of both the Humanities and Philosophical and Theological Faculties of the Ukrainian Catholic University called “Kyivan Christianity and the Union Tradition.” This academic initiative, supported by the Synod of Bishops of the UGCC, should strengthen the prophetic voice of the Kyiv Church and promote the unity of the Ukrainian Churches of Volodymyr’s Baptism.

Starting from 2015, a public segment of the program – the project “Soborna Ukraine and the Kyiv Tradition,” has started. It should emphasize the millennial connection between Ukrainian culture and Christianity.

The academic objective of the program is to critically examine the theological, canonical, and sociocultural sources of the Kyivan Metropolitanate in the broader comparative context of the universal Christian traditions of Byzantium, the Latin West, and Eastern Orthodox communities. The program focuses on an interdisciplinary study of the Christian East and West traditions formed on the civilization frontier.

In September 2017, 11 volumes of the series “Kyivan Christianity” were presented in Sofia of Kyiv.